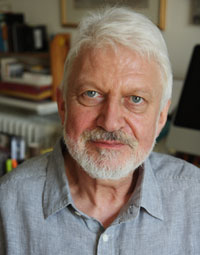 Biography | Chapter 1. Anton Gill was born in Ilford, Essex, the only child of an English mother and a German father. Both parents died in 1995. His mother taught English, Russian and Drama and his father was an engineer. His early infancy was spent in Bamberg, Germany. He speaks good French and German, and sketchy Italian and Spanish. He was educated at Chigwell School, Essex, (1960-1966), where he did a lot of acting and decided that he would go into the theatre. At Clare College, Cambridge, (1967-1970), he did more acting, and directing, ending up as President of the CU ADC (Amateur Dramatic Club) and several other drama clubs, as well as running his college’s Fine Art Society. He left with a 2:1 in English Literature with French and German subsidiary subjects. BA Hons. 1970; MA Hons. (Cantab.) 1973. While at Cambridge, he was taught to punt by Salman Rushdie, who became a great friend, and also worked in Cambridge theatre with David Hare.

From 1970 – 1976 he worked professionally in the theatre, principally as an Assistant Director at the English Stage Company at the Royal Court Theatre, London, where he worked with, among others, Lindsay Anderson, Samuel Beckett, Ronald Eyre, Athol Fugard, Albert Finney, Billie Whitelaw, John Osborne and Anthony Page. He also wrote plays, one of which was performed at the Theatre Upstairs in 1973. He ran an Experimental Theatre in Geneva for a season in 1973 and did a ‘collective creation’ play about François Villon there, which he later re-wrote as a formal play. This was directed at the Cologne City Theatre by Hansgünther Heyme in 1975. Gill also worked with John Osborne on a season of his plays at Greenwich, 1974/1975, and on the premiere of Samuel Beckett’s NOT I at the Royal Court, 1973. Anton Gill’s one-woman play “Waiting” was put on by LA MAMA in New York in 1976.

From 1976-1978 he was a Drama Officer at the Arts Council of Great Britain, with special responsibility for new plays and trainee directors. He started to write for radio, and contributed a number of arts features and plays, including “The Man Who Wrote Shakespeare”, a comedy starring Roy Kinnear and Peter Woodthorpe, and “Dandolo”, starring Carleton Hobbs in his last role, a play about the Fourth Crusade. “The Berlin Resurrection” was a black comedy set in the Berlin Natural History Museum in the last days of the Second World War.

Radio Features included a documentary about whales and whaling, “For the Whales”, and a biography of Alexander Pope told through his letters, “The Spider’s Touch. In 1976 Gill worked as a script editor for BBC Radio Drama, and from 1978-1980 he was a Senior Drama Producer with the a href=”http://www.bbc.cuk” target=”blank”>BBCRadio 2