City of the Dead is now available on Amazon: http://www.amazon.co.uk/City-Dead-Anton-Gill-ebook/ 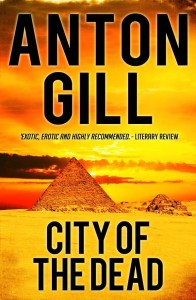 This is the third of the Egyptian Mysteries featuring the scribe turned private eye, Huy. The Journal du Dimanche in Paris said, ‘Gill brings his complex hero fully to life, as he both solves crimes and grapples with the even greater mysteries of aging, failed love, and friendship betrayed.

Huy evolves from book to book, and the series achieves a true profundity.’ In his biggest case so far, Huy investigates the death of the Pharaoh Tutankhamun – did the young king die accidentally, or was there more to his death than meets the eye? Huy enters the tangled world of power politics and barely manages to stay alive himself.