The Egyptian Mysteries is a series of six interconnected novels featuring the world’s first private eye, the scribe, Huy, who learns as he works, a reluctant detective working in a world of power politics during the reign of Tutankhamen that followed the death of the Pharaoh Akhenaten, where sex is a commodity and life means nothing.

The first two have already been issued as eBooks by Endeavour Press and are available from Amazon – amazon.co.uk and amazon.com

‘City of Dreams’ is a gripping Egyptian thriller from master of the genre Anton Gill.’

‘Brilliantly researched history blending with a tense thriller to rank with the best of them.’

‘Anton Gill supplies enough tension and breadth of description to keep one wanting to know the answer…and he is very readable.’ 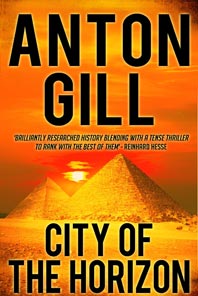