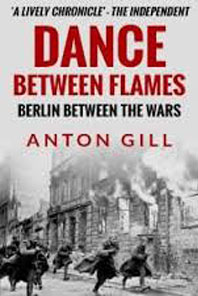 And lastly, the book about Berlin between the wars, 1919-1939. 20 very tumultuous years for Germany and especially for the capital, whose inhabitants really disliked Hitler – almost as much as he disliked them.

There have been big exhibitions there recently about the city on the 70th anniversary of the end of WWII.

I stayed at the Adlon, and you really have to rub your eyes to imagine what Pariser Platz looked like in May 1945. In the 20 years since I was last there, Berlin has changed so much – but it still has the melancholy grandeur I remember from the decade, between about 1983 and 1993, when I was pretty much there all the time.

The art scene now is fantastic; and the Holocaust memorial to the Jews, just south of the Brandenburg Gate, is one of the most moving monuments I have ever seen.

Anton Gill > My Publications > Dance Between the Flames