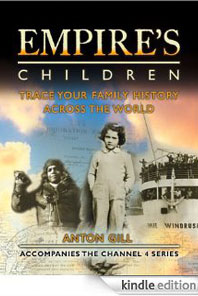 Anton appeared at the festival to discuss Empire’s Children, a book and documentary series that follows six prominent Brits searching for their family roots across the Commonwealth.

Along with his earlier book in theWho Do You Think You Are series, Anton is swift becoming a household name amongst the rising tide of amateur genealogists. But in an intensely varied twenty year writing career he’s produced more than 15 books, ranging from contemporary history to crime fiction, and including The Journey Back from Hell: which recorded the personal stories of more than 100 survivors of the Nazi concentration camps.
We sat down in the Kandinsky Hotel to talk family trees, bare knuckle boxers and the Romanian secret police…